So who is J Howard Miller, a name that one will often coming across when doing research on Herman Miller and Howard Miller.

J Howard Miller is a noted artist who lived from 1918 to 2004, who was known for many of his works, but probably best known for his artwork during World War II, some of which became iconic images from and for the war. At that time, Westinghouse was one of many very important suppliers to the military, and one mission it was tagged with was to come up with a series of posters by the National War Production Board. J Howard Miller got the assignment.

Below are 2 works of art that will likely look familiar to anyone who either lived through WWII or who has studied the period in any depth. J Howard Miller painted this work while working for Westinghouse, which was a major supplier to the USA Armed Forces. This iconic image came to be associated with Rosie the Riveter, even though it was Norman Rockwell whose artwork actually led to the Rosie the Riveter term coming into use. 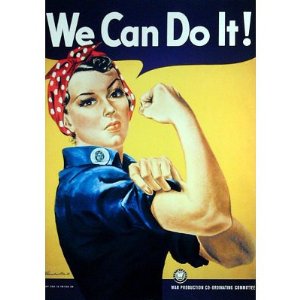 Frequently referred to as Rosie the Riveter

Another of J Howard Miller’s works will also look familiar to those who have lived through or studied World War II. Here is that one: 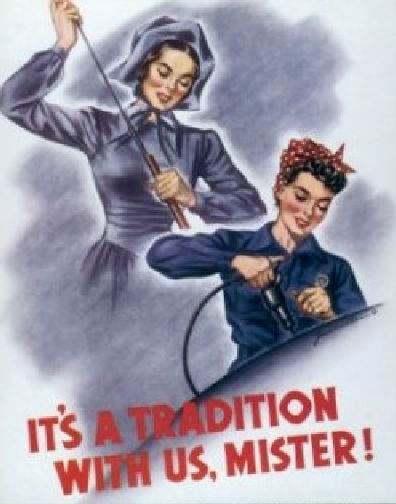 We wish we knew more about the art work, many of which are still sold as posters today, that J Howard Miller created and that certainly inspired millions of men and women working at home and abroad defending and supporting the US and its allies in the war.

Here is one question we are not sure of the answer to. Is J Howard Miller related to Howard Miller and Herman Miller? Did he ever have anything to do the the grandfather clocks and wall clocks and mantel clocks business at Howard Miller Clocks? We have not found any direct references linking the lineage of these people. It is worth noting that Howard Miller’s most expensive 2 grandfather clocks are known as the JH Miller Grandfather Clock I and JH Miller Grandfather Clock II. Perhaps a pure coincidence. Maybe not. Anyone who knows for sure one way or the other is encouraged to let us know, and to supply definitive source documentation. Come to think of it, the Howard Miller Clock Company is still run by a direct descendant of Howard Miller. We hope to find out, and soon, one way or the other.