According to a recent article in The New York Times, President Obama’s Oval Office, from which he addressed the nation on Tuesday night about the important new milestone in Iraq, has gotten a makeover.

Two constants in the White House Oval office are the desk, and much more important of course, the grandfather clock, as can be seen in the picture below: 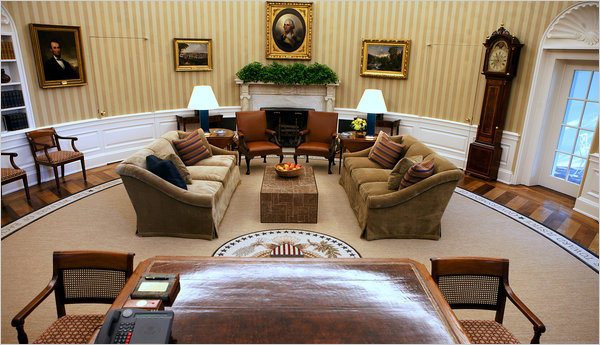 According to the Times article, the new design is more neutral hues of brown and taupe, and less of the gold and yellow tones which adorned the room when President George W. Bush was in the White House. Also now gone is the sunburst rug which had been designed by former First Lady Laura Bush, and of which the then President was said to be so fond of, and was in sync with his continuing expression of optimism.

The makeover was not done at taxpayer expense.

Other related posts on this subject can be viewed quite quickly by clicking on the links below. Be sure also to look at the responses to each post, as this clocks subject has generated some quite interested and informed exchanges and responses. Click on each link to see individual post and replies and discussion: