Big Ben, as the iconic clock sitting atop the Houses of Parliament in London, turned 150 years old today, May 31. The clock still runs mechanically as it did and with most all of the same parts as it did when it began ticking away in 1859. The clock still also plays the Westminster Chimes, which as most clocks enthusiasts know, is the favored chime for grandfather clocks, wall clocks, mantel clocks and more.

As we have noted before and many know, Big Ben actually refers to the bell that is struck, but the name has come into common usage as the name for the clock tower as a whole. We go into more detail on this and other aspects of this wonder timepiece on our website which can be found at the following link: /tour-big-ben-clock-tower.html.

July 11th will bring another 150th Anniversary, as that is the date Big Ben actually first struck its bell, telling time with sound and with Westminster chimes. The clock is generally wound three times a week, and the very minor time adjustments that are made are done by adding weight to the weights equivalent to the size of USA pennies.

The 4 sided timepiece masterpiece has always captured the imagination of legions around the world. One of the more amusing ways the Big Ben Clock has been in the news in recent generations has been by ongoing rumors that the British Government has decided to turn Big Ben digital. As far as we know, this first dates back to a 1980 broadcast by the BBC on April Fools Day where they announced that Parliament had made this decision, and phone lines were opened to sell parts of the famous clocks facade, including the hands. Calls came in with offers from as far away as Japan, and this April Fools Joke has gone down in the annals of history as one of the greatest, perhaps in the Top 100, April Fools jokes of all time!

We have seen postings in Blogs at other times, and we have to say that frankly some of them seem to think the news is real and new, or perhaps they are only hoping others will pick it up. Below are some “actual pictures” of the Digital Big Ben Clock”: 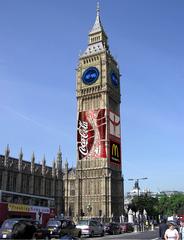 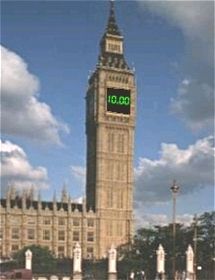 Houses of Parliament with Digital Big Ben Clock FOR FUN ONLY